I am writing this to you because you are away from your homeland. I do not know where you are now. I cannot imagine where you were, what the air smelled like, or the pain you went through. I can only express my gratefulness.

Yesterday was one for the books. But since you were not with me, I will try to describe it to the best of my ability with hopes that you may feel the way I felt, smell the things I smelled, and saw the things I saw.
After several days of rainy weather, cold winds, and blankets of gray clouds, the sun came through to show the better side of an early spring morning.

I should explain that I am always the first awake in my house. This has always been the case. I have always been somewhat of an early riser, which is fine because it allows me the opportunity to watch the sunrise and ease into my day.

Next to wake is my daughter. Although she lives with her mother, my daughter has her own room in my house. The four walls are painted two different shades of turquoise like she requested. The ceiling is white, and so are the trim, and the door, as well as the door to her closet. Her bed is covered the same as any 11 year-old girl. She has a pink comforter, pillows with pillowcases that match the color scheme of her room, and ones that match the comforter.
She has a white desk, which is where she keeps her art supplies. She has a small armchair with a SpongeBob blanket on it. There is a  white, shaggy, area rug, in the center of her hardwood floor and a rack of wicker bins for some of her stuffed animals. The rest of her stuffed animals are scatted in specific order near the pillows on her bed. I have been instructed not to change this order as it is very important.

This room is empty during the week—but I always make sure to stop by and visit. I like to look in. Sometimes I sit down on the bed. Sometimes I sit in the chair. I look at the art supplies on her desk and the drawings she has drawn, which are hung on the walls around the room. I look at the different stages she made for her dollhouses. She calls them “Kimmel-Ville.” And I like that. I like the small camper she set up with figurines as if it was an actual camping site.

She is growing up in a generation of new education systems and new math (as if something was wrong with the old math). Her world is a world of technology, smart phones, and computer tablets. As a grown man and father, I now understand how my father felt when we brought home things, like say, a new television for example. Or a new VCR, which is now an obsolete technology, but then it was cutting edge. I have somehow become like my Old Man when it comes to understanding our modern gizmos. I am lost with today’s gadgets. Same as my father was before me. But this is not important.

As the sun came up, I watched the sparrows balance along the phone lines that string across the rear border of mine and my neighbor’s backyard. The wind was quick enough to cause the little birds to flutter, as if the heavy breeze nearly shook them from their perch.
The sky was light with the colors of morning and the reflection of dawn brightened the east side of the tall trees that reached above the rooftops of the surrounding homes. And while equipped with my trusty cup of coffee, I watched this phenomenon from the window in a smaller room at the rear corner of my house.

The trees have yet to sprout for the season. Spring is here—but more so in name than in warmth. The temperatures have not been too generous as of yet; however, there have been glimpses of perfect days.
And yesterday was one of them.

My town is quiet . . .
I grew up here. I moved away for a long time, but I came back with a return that seemed fitting. I know my way around the side streets. I know some of my neighbors and some of them know me. They are nice enough to smile and wave hello. I like this. I like that there is little traffic on my street. I like that my block is quiet and the kids, for the most part, are all respectful and usually quiet.

The houses on my street are mostly the same suburban style. They are all two-story, single family homes, with a driveway in all cases and garages in some. Each house has its own backyard and front lawn. We all have walkways and we all have sidewalks.
The sidewalks have a strip of lawn between them and the curb, which lines the street. There are trees planted in that strip. And none are overly large. The largest of them all is also the oldest tree. I have a name for this tree, which is simple to remember. I call him my friend, The Old Tree.
No my friend is not so pretty. The Old Tree has lost many of its limbs and the limbs that remain are like that of an old balding man. Only a few of its branches have leaves. But while my friend The Old tree is not the prettiest on the block—I do think his survival and refusal to fall in even the worst of storms is rather beautiful.
But again, I digress . . .

Instead of a morning filled with technology, I decided to have my daughter dress herself and accompany me to the nearby park for a walk around the pond. Eisenhower Park has been a part of my town since the mid 1940’s. I suppose the park has seen many changes over the years. It is home to a large golf course. There is a miniature golf course too, which is somewhat new. So is the indoor pool. That side of the park is different, but Safety Town is still the same.

Safety Town is a small town with streets, traffic lights, and shed-like homes to simulate an actual town. This is where grade schools take their classes on field trips to learn the proper ways to cross the street. And like many from my town and the towns around me, this is where I learned the saying, “Always look both ways before you cross the street.”

There is a certain, but almost forgotten brilliance to this lesson. This reminds us to take nothing for granted, and to be mindful of our expectations because sometimes, there might be something coming from another direction. And had we taken the time to look both ways before moving, we might have moved safely without an accident.

I did not take my daughter to Safety Town. Instead, I took her to the pond. I used to come to this same pond when I was her age. I would fish with a handheld fishing line, a small hook, and a whole can of corn to use as bait. I would bring a little bucket to keep the fish alive and a small tackle box. I sat at the concrete ledge while joggers ran around the cement path which was a stretched out, slightly-bent, oval-like pattern that mapped around the manmade lake.

Men, usually elderly ones, came to the lake with model sailboats. They sat on the park benches beneath a clear blue sky with remote controls in their hands, watching from their seat as their sailboats calmly maneuvered through the small choppy waters of the pond. The water was not terribly clean and none of the fish were edible or overly big. Most of the fish were sunfish, but there was a decent amount of respectable sized catfish that swam in the center. 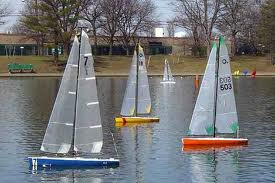 There is a theater on the east side of the pond. The west side borders a fence that separates the property from Merrick Avenue. This has remained the same. And on the north side of the pond, there is a stage of monuments.

There is a tall monument for the Korean War. There are rows of knee-high walls with name of Long Island residents that served our country proudly in the Vietnam War. And high above this is my country’s flag. It waves high, and when the wind is crisp, you can hear the fabric of our flag snap and crinkle in the swift breeze.

There is an additional monument to the pond, which was not there when I was a young boy. This monument is the 9/11 monument. There are two steel beams from the Twin Towers planted in the ground. There is a wall that reports the names of Long Island residents who perished on that day. And above this, stemming from a small concrete island in the pond across from the monument, there is another large American flag that waves proudly. 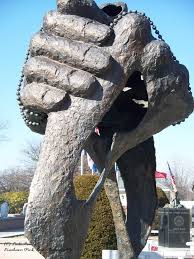 “All we had was each other.”

We passed a statue of The Angel of Hope. This is the angel for lost children. This is the angel that cares for our youth when they unexpectedly, and above all, unfortunately cross into the afterlife. I wrapped my arm around my daughter’s shoulder and pulled her close as I explained the angel and what the statue represented.

Perhaps the wind was a bit too chilled for her. Rather than walk further, we returned to the car. Then we sat at the same diner my parents would take me to when I was her age. And though much of my town has changed, or had a face-lift in some places—the diner on Merrick Avenue looks the same as when I was a young boy.

It was a good day . . .
No, it was a beautiful day in fact. And before the sunset, my daughter and I took a ride over to Parkway Elementary School to play on the swings and run through the playground. We were closing in on the hour before sunset. The field behind the school was empty. So was the playground, the swings, the monkey bars, and the jungle Jim.

I thought about the freedom I have and the men who died for it . . .
Yesterday was a beautiful day.
I saw my share of red-breasted robins, which means spring is upon us and warm weather is on the way.
There was no bad news to report
No bills came in the mail
No one was hurt
There was no talk about our economy
There was no talk about terrorists or the threat of war.
There was just a day for a father with his daughter
It was a brought to us by the men and women who served our country proudly.