We forget that comebacks are possible . . .

It was a Monday night game on October 23rd in the year first year of our new millennium. I remember it well. The New York Jets went into the fourth quarter against the Miami Dolphins, losing by the score of 30 – 7. By all accounts, the game was over. Fans were leaving the stands and making a break for their cars to beat the exiting traffic and make their way home.

It was a Monday night in my life when all else was similar to this game. I couldn’t seem to make a play. I felt like I was losing all around and in all regards, I felt is if there was no hope for a comeback win. I was working at a job that left me wishing I was someone else. I was in a relationship that was not meant for me. My finances were poor but at least I had income and I was in a rented house instead of a basement apartment.

My hours were early hours, which meant I was out of my home and on my way to work by 4:00am. My roommate worked late, long hours; however, my roommate was also a season ticket holder. He was also one of the fans that decided to leave at the end of the third quarter to beat the traffic because, of course, the game was over.

But it wasn’t over. The game wasn’t over by any means and somewhere, somehow, the New York Jets began to show signs of life. I remember it began with one catch, which could have very easily gone the other way. With a pass thrown by quarterback Vincent Testaverde, a receiver by the name of Laveranues Coles not only stopped an interception, but made the reception in the end zone, which set up a touchdown and created the momentum for one of the greatest comebacks my eyes have ever seen.

Somehow, somewhere, the New York jets came from behind. They reached down deep and the pulled off a comeback, tying the game, and then scoring a game winning field goal in overtime. And just as the field goal was kicked through the uprights behand the end zone; my roommate pulled into the driveway with his horn honking. And me, I was running around my bedroom, screaming in the electric blue lights, celebrating one hell of an incredible victory.

I ran downstairs to greet and scream at my roommate.

“What they hell are you doing here?” I asked.

My roommate was one of the fans that left the game. Since he was a huge fame, my roommate was happy for the win but he was near hysterics that he left the stadium and missed seeing the comeback himself. Instead, my roommate left and heard all the details on his car radio.

After all the hustle calmed down, I remember shutting the television with hopes to find at least a few hours of sleep. I lay there in bed, thinking about the game, and thinking about this thing they call a comeback.

I received an early morning phone call today. The call was from a client of mine. He was resistant to change and otherwise looking to quit. He was unwilling to seek help or to accept any navigation of care. Essentially, he was behind on points and his game seemed over. I met with him briefly yesterday. His eyes watered and his nose ran. He was achy, crampy, and hadn’t really slept in a few days. But, —he was able to smile at me. He was able to speak with me and this morning when my phone rang, he was able to tell me his schedule today and explain the time he will arrive at an out of state treatment center.

I needed this win.

The other day, I lost a client through no fault of my own. Unfortunately, things will not always go as planned. This client was turned away at the hospital and being homeless, the temperatures outside as frigid as ever, and living with a habit, —I never thought I would hear from this client again.

Last night, I received a call. They found the client, and while the situation was certainly frightening and far from optimal, the client is safe, warm and will be entering into treatment this morning.

Now, in all fairness, neither of these accounts have anything to do with me. No, this has to do with a power outside of me.  Somewhere, somehow, two losses turned out to be successful victories.

I needed that one too.

Last night I went through an orientation tour through the county jail. This is a necessary formality, which I had to go through in order to begin my next empowerment program. Coming soon, I will have my own class in the jail, which will consist of my own empowerment program that will be set up to encourage life changes as a means to stop the revolving door in jails.

While on my way to this orientation, one of my old neighborhood friends was laid to rest. He was in a hospital where five others lay brain dead and all of them were brain dead from an overdose.

I walked through the front door of the jail and passed through the electric gates that sectioned off the dorms and separate wings. I listened to the instructions and I saw some of the inmates and a few familiar faces.

In my head, the score is 5 -2. In my head, somewhere, somehow, this is where I can help stage a comeback.
As I see it, there is a fight between good and evil. As I see it, there are people leaving the stands, arguing and complaining, saying this is a game that can’t be won. 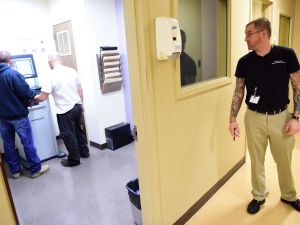 As I see it, maybe it’s the fourth quarter. Maybe the odds are against me and maybe another loss is on the way, but no matter what, I’m not leaving. I’m not giving in, and who knows . . . I might just be on the verge of a miraculous comeback.

Truth is the possibilities are endless. Perception of loss is something that often creates loss so rather than give in or quit, I will look for victories (no matter how small they may seem) and I will keep playing, keep driving for the end zone, and I will not stop until I come back and win.

Right now, there is a private client of mine asleep in a warm bed. She may not be in the shape I wish for her . . . but she is indoors. She is warm, fed, her mom knows where she is and more importantly, she is one step closer to finding a better way of life.

I’m on my way out the door now. It is below 20 degrees outside. The wind is sharp like a blade but the way I see it; I need to reach down deep because the game isn’t over. In fact, this game is just starting and I am ready to play.

I may not have an arm like quarterback Vincent Testaverde or a receiver like Laveranues Coles, but I’m not giving up until I cross the goal line