To whom this may concern;

Please allow this letter to inform you that I, Benjamin J Kimmel, being of sober mind, body, and spirit, and having completed several years of continuous sobriety regret to inform you there are no changes in the world of addiction.

Although names have changed since my time of activity, the accents on the street are different, locations to pick up have switched, and there are more forms of addictive medication now, which are a bit easier to access through simple doctor visits, and in most cases, they are easily attained with a prescription, the addiction game is the same as it was the day I walked through the doors of a treatment center in early September during the year 1989.  I can assure you, the stories as well as the insanity; the crazed beginner, the street drunks, the junkie newcomer, wild-eyed, mad, lost in psychosis whether drunken or drugged are no different and no less sickly or more desperate now than the time of my last fix.

In part, this letter is detailed to inform you that nothing, aside from complete and total abstinence, albeit unrealistic to the drunk or junkie; there is no other remedy to this otherwise deadly, incurable and social illness. Partly to inform you that geography plays no factor and partly to inform you that this sickness is not age sensitive, nor prejudice, and partly to express that addiction neither leans towards nor away from any social class, this letter is written wholly and completely to inform you that above all, there are no changes in the active sickness of alcoholism. There are no changes in symptoms or personality, and same as it with the longhaired, shorthaired, shaved-headed, man, woman, or otherwise, not one thing has changed since the entry of my position here in the 12-Step society.

I remember the last of my fixes very clearly. There I was, a full day into my binge, and crawling across the floor on my hands and knees. I was digging through the cracks and crevices in the hardwood flooring of my bedroom, sifting through imaginary pebbles of white powder that trick the mind the same as a mirage tricks the thirsty in empty deserts.

I was 24 hours into this binge. I was pale-skinned—my flesh was almost blue, in fact. My lips were swollen and discolored to an odd shade of purplish blood with white burn marks singed into the flesh of my mouth after hours of smoking a glass pipe.

There I was, facing the mirror, staring at an empty, ghost-like reflection of me. My eyes sunk in with black marks beneath them to pronounce the indentation of my eye sockets. The reflection I saw matched that of a dying man, abandoned of all hope, panicked, and unable to keep up with conveyor belt beneath me.
I looked thin, frail, sickly, and possessed like a cocaine zombie. I was wide-eyed, plugged in and electrified to something unthinkable. After ours of enduring a sickness where life is most alive while living only inches from death, I was mumbling, and clenching my teeth.
This is how it goes . . .
When the crash comes, the body undergoes an aftermath. The mind responds to the fallout where all has been shattered by continuous explosions, which massaged the mind, and romanced a chaos that euthanized brain function to the point of euphoria.

Overtaken by weightlessness, and succumbed to the lofty expressions that kept me distant and elevated above the world below, I could be there—unmoved, unbothered, and uninvolved enough to feel perfectly detached.
I was high and forgetful enough that while floating away, the ground below me was nonexistent. I felt unhinged. There was no pain up in the clouds. The pain was below. Sadly, the pain comes with the crash. However, this is the price we pay. This is the cost of admission and the reason why they say, “The first hit is always free . . .”
Oh, but we pay. We pay for it on the way out and not on the way in.

The price for paradise always comes with a bill. Unfortunately, this was a bill I could never afford. Unfortunately, the beast charges interest. My beast was like a thug loan shark on the street. At the end of the high, the interest was due, and when I couldn’t pay, the beast smiled. He took pieces of my soul in exchange for a dose of temporary freedom. And as a result, this slaved me to his hip.

The worst I have ever seen myself was on the morning after my binges. I could see the after affects and the desperate look. I could see what the beast took from me.
I watched the faces of tempting angels that were pretty upon their introduction and slowly saw as they turned horribly ugly. I was fooled. Even when I knew what was coming, it was too late. I was fooled and on the dangle, chasing a high that was only elusive in the end.

All I wanted was another hit, but all this would do is put off the inevitable. I just needed one more, but one more would have done nothing but dug me in deeper. One more would have done nothing other than prolong the pain. I tried to get out. I really did. I tried to find another way to balance myself but the deeper I fell, the harder I tried to escape. The more desperate I became, the faster the conveyor belt moved beneath me. I had to find a better way

Then came heroin . . .
It’s a strange thing to feel wrapped in a cocoon, untouched and weightless. The next thing you know, hours have passed and the world has changed to a slow drastic crawl. It’s a strange thing to see heroin as a perfect alternative; it takes away the concern and left me so I was unbothered if I died . . .

I imagine myself as I was all those years ago. I have often wondered what I would have become had I never tried the things I tried. I wonder who I would have been if I had never gone to places like Liberty Avenue and Jerome in East New York Brooklyn. What would have happened if the bullet I heard hit me instead of someone else?
I wonder what would have happened had I turned right instead of left during a particular Sunday night in August, 1989. I wonder what would have happened had the police not taken me into custody that night or had the charges been dropped.
I sometimes think, “Maybe things are different now. Maybe there’s another way to go about this and I could be normal just like everyone else. I could have a drink or two and maybe nothing would happen.”

I question myself and say, “Maybe?” 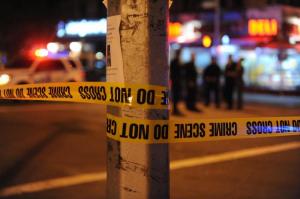 Earlier this week, I had the opportunity to sit in a rehabilitation center and speak with the newcomers. The look in their eyes was no different from the look in mine when I entered treatment. We both felt the same way in the beginning and we both had the same doubts, sickness, and fears.

I spoke with a man who walked around the streets for a few days. He was barefoot and high, in Downtown Los Angeles. His eyes were wired open with a familiar look that I knew all too well. He was terribly thin, pale-skinned, and his eyes fell in his skull with dark, black rings beneath his eye sockets. This was a man, homeless, and with no other way to get help than to explain that he was going to kill himself if no one helped him. I saw him at day 9. That means he was sober for 9 days.

During a meeting with this group, the topic of the meeting was hope, in which the speaker asked, “What do you hope for?”
I hope that you read this. I hope I will not lose more friends to the disease of alcoholism and drug addiction. I hope for more awareness. I hope for an answer and a breakthrough in the mental illness field. I hope for a solution that does not involve medication, which does nothing except cause another dependency,  and above all, I hope that I never forget who I am, where I come from, and what it took for me to get here, which is just shy of 26 years of sobriety because, after all, there was a time when I too had 9 days once.

In closing, I write this letter to acknowledge the sickness is very much the same as it was and very much alive. There have been no changes and no improvements upon the still sick and suffering. The denial remains thick. The social snobbery of the wealthy martini drunk remains as it was. The bravado is no different and the excuses are still the same. The opinions of the highbrow or socially acceptable addicts have continued to look down upon the street junkies. Meanwhile, these permissible and socially acceptable addicts  have a stock-pile of excuses with a stock-piled medicine cabinet that are filled with names such as Valium, Xanax, Klonopin, Morphine, Vicodin, or Percocet.
There is an entirely permissible addiction to prescribed medications like Dilaudid, and trans-dermal patches of pain relief like Fentanyl, and there are other prescriptions they such as Kadian, Demerol, Oxycodone, Hydrocodone, and Dolophine or Methadone, and the list only continues.

It is my submission now and going forward that the only way out of this sickness is to stay sober. Even after nearly 26 years of continuous sobriety, without hesitation, I plan to do just that.