I’m not sure where the shirt is now but I know that somewhere is a white t-shirt with a painted outline of my daughter’s hands and the words Happy father’s Day written above and below the childlike artwork.
I’m not sure where it is though — it’s probably stuffed in a box somewhere with other little scraps of memories. I’m not sure who chose the size of the t-shirt. I always assumed it was one of the kids that worked at the daycare center because the shirt was not the right size, which is fine because shirts like this aren’t really for wearing. No, shirts like this are meant to be found randomly in a drawer somewhere or in a box and you find them while looking for something else. And when this happens, the timeless magic that goes into making such artwork on an plain white t-shirt is enough to make a man step back with a smile. It’s enough to make a man think about the first time he held his child and how small she was. It’s enough to bring a tear to a man’s eye when he realizes his little girl isn’t so little anymore but once, he was her hero.

I’ve received Father’s Day gifts after this one, only none of them are remembered. But that shirt is something I will always remember. I have it somewhere. It lives where memories live and it cannot be taken away. It can’t be changed or destroyed by way of divorce or differences in parental opinions. No, this shirt is mine. It belongs to me and I hold this shirt close to my heart.

Come to think of it, I’m not sure if I can remember any of the Father’s Day gifts I gave The Old Man. Maybe I made him something out of clay in art class. Maybe I drew something for The Old Man and maybe it went somewhere to the land of forgotten Father’s Day gifts. And if you ask me, I believe this is a real place. This is a place where old artwork on construction paper lives and it ages with faded color and old glue that once held buttons to the page, with glittery things, and whatever else could be found in a kindergarten classroom.

I can’t say I remember any particular Father’s Day memories with The Old Man. He’s been gone a long time.

I do have memories though.

I was thinking about one in particular when I was small but not too young. I was old enough to understand the basic fundamentals of casting a fishing rod but I was still young enough to believe that my Old Man could beat up your Old Man. I was young enough to want to be exactly like The Old Man, to be fascinated by him, yet I was old enough to understand that time is often a luxury and luxuries are not always an affordable thing

It was late summer. It was towards the end of August, I feel, and the snappers were making a run by the docks and the shoreline at Wantagh Park in Wantagh Long Island. The day was a beautiful summery day. The sun was high and hot. The sky was the bluest I have ever seen and the white strips of clouds were scattered and spread out like feathery angel wings. The Old Man and I took a walk down the shoreline away from the others that fished from the pier. We took our shoes off and waded in the warm, knee-high waters.

I remember asking him, “How many do you think we’ll catch Pop?”
The Old Man smiled, “We’ll catch a dozen of we catch one.” 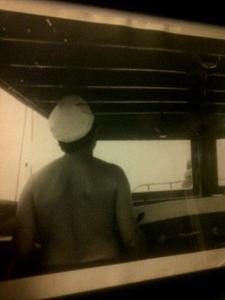 around before my time. I always dreamed The Old Man and me could take a trip like this one day but for the moment, I was grateful for what I had.

We used live killies for bait. Killies are a small baitfish that worked very well for times like this. We also used frozen spearing because that worked well. Spearing are another baitfish that came in a frozen packet, which we would thaw out by leaving the packages in a bucket of saltwater from the sea.

We started out slow. I tried to move my casts around to find where the fish might be and while moving, I stepped on a pointed clam shell that stabbed into the bottom of my foot.
Yes, this hurt. And yes, it was bleeding but times like this with The Old Man were rare. I never had many of these moments so when they came; I wanted to hold them as tightly as possible.

I went back in the water to cast my line out. I watched the red and white float bobbing up and down in the divots of the rippling waters — the summer sun growing hot, the sound of nearby boats moving through the canal echoed from the distance and small airplanes flew passed with humming engines while dragging a banner of advertisement behind it.

We faced the bay and this was perfect. Small waves moves in and chattered against the sand. A few seagulls flew overhead, calling out, and crying to each other while while flying over the waters and searching for food. Aside from this, all was quiet and the moment was perfect.
The Old Man was tanned. His salt and pepper hair which parted from right to left was blowing gently in the soft summer wind. I could see him watching the water. I could see there was something on his mind — he looked so intense and the sun glistened on his skin.
His chest exposed to the sky, his eyebrows folded downward as if to prove my observation that yes, he was deep in thought. The Old Man held the fishing rod in his hand, slowly turning the reel on occasion to spool in the line which went slack. It was warm and the day was glorious but the fishing was slow.

Eventually, a small school of snappers swam by, and in an instant, the action become alive. My foot hurt but the pain was erased by the moment. I washed in the sea and taken in by the fact that I was just a boy with his Old Man, fishing for snappers at Wantagh Park, and the rest of the world was nothing else but an unimportant additive. Of all my memories with The Old Man, this one ranks among the highest

I have other memories of The Old man to tell you about and more to explain when we are able to speak. As I write this, I am thinking about the similarities between me and The Old man.

When I was a boy, I wished I could spend more time with him. And when I’d ask to spend more time with him, The Old Man would be too busy. He would be too tired or there was something on his mind and his mood was not in the right place. As a boy, I felt rejected. I understand more about this now; however, understanding is something that comes with time

Here I am now. I’ve become an Old Man myself.
I’m a dad and I have the same struggles. I have the same problems with trying to figure out bills, pay them, and keep the house together.
I have insecurity. I have frustration too. I have work problems and fears, but a child’s life is a child’s life. After all, st some point all a kid wants is a little attention from their father. Along the way, I suppose I forgot what this feels like

I think I’d like to change directions. I want to work on this and make more time because in truth, everything else in this world aside from family is just an unimportant additive.

If today is Father’s Day then I would not have this gift had it not been for you.

I just wanted you to know this