My roommate John has been missing for two days now. His things are still in the room. His dresser is still left the way he usually leaves things. John is somewhat obsessive/compulsive with the way he organizes his arrangement of things on his dresser. There is an old black and white picture of a woman that I always assumed was John’s mother. There is a picture of St Dismas.
Dismas was the good thief that was crucified next to Jesus and asked to be remembered. There was a laminated mass card he kept placed at the top left corner and there are the white Rosary beads which John wore around his neck and underneath his shirt.

I can feel John’s presence in the room. It is almost like he’s here, but he’s not. I can’t say this any other way. His bed is made. His things are where he left them. Everything is in its usual place, except for John.

I am starting to lose track of time here. It’s hard for me to count days anymore. I still want to leave, but yet, I have to admit that rehab life isn’t that bad. I am used to the food now and used to the routine. I am smiled at now by staff and even the old, uncomfortable-to-look-at woman in the commissary smiles at me and says hello.

The funniest thing is how I see myself now as opposed to how I saw myself when I first came in. I see things about me now that I never thought to see before.
I see the difference in my thinking; however, I still struggle with the ideas of what will come next after I leave here.
All I know is that I watch the new arrivals come through the double-door entryway, sick, and often times drunk. I watch them like a 1980’s middle-aged housewife watches a soap opera on television. I find myself trying to predict the next thing that will happen or figure out the story behind the plot. I wait to see and watch for the drama. I smile too, which is exactly what was done to me when I came to Mountainside. I hated everyone for it, and yet, here I am doing the exact same thing.

Billy left yesterday. I will miss seeing him around. I am now the senior man at the evening kitchen detail. The strangest part of this is that when I began, I was the quietest and most miserable, but not anymore. The new guys are Gus and Chris. The Godfather is still with on kitchen detail. He stacks the dishes away.  I still wash them. Chris dries them and Gus fills the crate before I push it into the dishwasher.

The turn-around here is interesting. People leave and new arrivals happen on a daily basis..
The new recruits are in and they act the same way I did when I first arrived. I suppose everyone goes through a period of adjustment.
Everyone resists at first but most come around. Even if for no other reason than to have it easier in groups and with the counselors, most of the intakes find their way into a routine.
Suffice to say this is what happened to me. I went from quiet and miserable to talkative and pleasant.

Helene and I talk often in the corridors. This would have never happened when I first came in. Jake is my counselor, whom I swore I would hate, but I don’t, and I have willingly opened up to him.  I protested in the beginning. I swore I would never talk or tell them anything. But somehow, all of that changed.
Maybe I wonder if I’ve always wanted to come clean about these things. I suppose no one ever asks to be beaten or abused. No one ever asks to feel disregarded or left out.
I never asked to feel the way I did. It just happened. I never wanted to be so lonely or angry or hateful.
I never wanted to feel so dependent on what I was doing, but at the same time, I have this little child in my mind, bursting at the seams for attention, and crying out loud, sad and scared, and the only way I know to appease this child is to pacify him with the comfort mother’s milk; namely, a drink or two, followed by a few blues or some Xanax.
I have this pathway in my mind, which all roads lead towards. I suppose I have always had this pathway. I have always calculated my math the wrong way when it comes to social settings

Truth is I was afraid for so long as a child, I became angry and swore that I would never be afraid again. In my defense, I responded to everything on the basis of this mindset.
Screw them before they screw me.
Hurt them before hurt me. And above all, never let anyone in passed the threshold of my heart because once inside; truth is, there is no telling what kind of pain could come my way.

I spent so much time trying to avoid another loss that I ended up losing everything. I nearly lost my freedom. I have no family to speak of. I have a child that I never talk about because we never talk to each other. I have a mother that will not speak to me. I have a father that is dead and in the ground, whom of which I hated more than anything and yet; I loved him like an abused and  beaten dog remains loyal to his owner.

I suppose I opened up to my counselor and in groups because I was tired of holding these things in my heart. Of course, I was angry. Who wouldn’t be angry?
I have scars on my body from childhood beatings. I had a gash in my back from a whip mark that came from a belt. I have a memory of sitting in my father’s Datsun as a teenager. I sat for hours, waiting for him to come outside from a bar because my father promised he would only be a few minutes.

It wasn’t always this way with my father and I. He was my first hero. I admired him. I loved him. In all honesty, all I wanted was some of his attention.

Maybe I was eight when it all changed. Maybe it was the bicycle he bought me for my birthday.
Maybe it was when I noticed there was the problem with the chain on my new bike and I excitedly interrupted my father. He was in the middle of negotiations with someone on the block. I remember it clear as day. It was a warm summer afternoon, August 30th. My father picked up a bicycle for my birthday so I could learn how to ride. We were outside. I was admiring my gift while my father was talking to Ramirez from up the block. Ramirez was a heavyset man, slicked back hair, slight beard, and dirty hands.
Apparently my father owed Ramirez for an old bet. My father was trying to act as if he had no concern. I was trying to see how I could ride my bicycle.

When I asked my father to help me, he quickly finished with Ramirez and slapped me across the face. Ramirez walked away. Then my father punished me by picking up my gift and slamming the small bike on the ground. He slammed it repeatedly until it was smashed and bent.
I screamed. I couldn’t understand how my father could be so cruel to me. I was so happy and then so sad in the blink of an eye. I cried, pleading with my father to stop slamming my new bike. But he continued.

I never looked up to my father after that. And oh, how I hated him. And oh, how I wished he would just love me as his son. Still to this day, I do not mention my father’s name. I can’t even write it.

I guess I needed this place to help let these things go. But still, my mind works in a way that I am not sure if I can stop the things that go through my head. I always end up in the same places and finding me doing the same things. I don’t know why this happens to me. It just does.

Sometimes the world is too fast. I feel like I am on a crash course and everything is coming at me. My thinking doesn’t rest. I can’t relax. I’m always on edge and always waiting for the next bad thing to happen.
I suppose this is one of the reasons the news about Brian’s suicide hit me hardest. I related to him.
I think about ending it all. I remember being in my apartment alone, falling down to my knees, weeping up to the ceiling with my arms outstretched and pleading in a humble and holiest submission to God, begging him to please take the pain away.
I felt like a dam holding back the floods, but finally, the gates broke open and I was flushed away by an outrageous sadness.

I never asked for this. I never wanted to feel this way, to be different, to feel alone, to feel unwanted, unremarkable, and to be so unimportant to the world that if I had gone through with my plan to end my life, no one would notice me until the smell of my dead corpse leaked from my apartment into the public corridors. Or worse, maybe I wouldn’t have been noticed until my remains were decayed down to the skeleton.

Even now, I am alone in my room at rehab. My roommate is missing. I feel absolutely everything I’ve been avoiding.
And now what?
What do I do next?
How do I get through this?
What am I supposed to do?

I have all these questions surging up and causing the anxiety.

I remember being a boy and my father had me hold a flashlight for him while he chiseled off a lock on a safe in our basement. I watched as my father hammered down on the chisel as hard as he could. He kept pounding and pounding. Sometimes he missed, and sometimes, my father hit down so hard and hit his hand. This was painful to see. He caused himself to bleed. I wanted my father to stop but he wouldn’t. He kept pounding. My father wouldn’t stop until the lock was chiseled off.

This hurt me to watch him.
Why wouldn’t he stop?
He was bleeding and breaking his own hand for God’s sake!

Eventually the lock came off.
I asked my father why he didn’t stop. I asked why did he keep going.

“Because that’s when the pain starts,” he said to me.
“It hurts when you stop.”

Who knew, back when I was a small boy, I would learn a lesson like this.
This is why I was always on the run.
Of course I ran. I had to run because if I stopped, that’s when the pain starts.

I know if I run now, the pain will just come back to find me later.
And that’s what frightens me. This might be my only chance to repair all the pieces of my broken life. 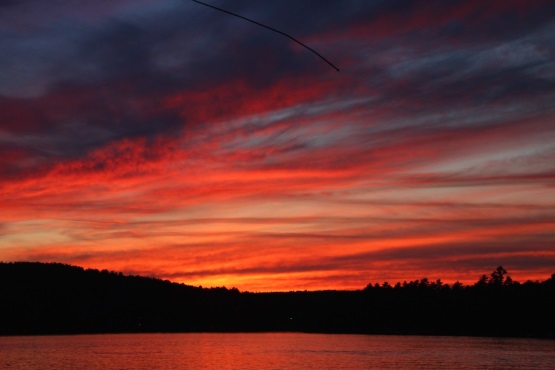