“I came home late last night and the stars were the brightest I’ve seen in a long time.
Usually, the city glare brightens the sky too much to notice them.
But it was late, and most of that brightness had gone to sleep.

I stood in front of my house and looked up;
I tried to find the biggest star and see if I could recognize any of the constellations.
I looked for Orion’s Belt and The Big Dipper.
I noticed strips of clouds hidden in the deep-night sky
and watched a plane fly overhead with its blinking lights.

I grew up here. In this town I mean.
I moved away for a while, but I came back.
The way life moves in circles and reconnects us is pretty amazing, if you think about it.

Someday, this will all make for an amazing story . . .”

October has changed the face of my neighborhood. Aside from the branches of emptying trees, or the color-changing leaves that hang on before finally drifting to the ground, the surrounding homes decorate for the upcoming holidays.
The first real buzz begins now with Halloween. Second is Thanksgiving, and the third or biggest buzz is Christmas and New Year’s.

I love this time of year . . .
The wind is stripped of its humidity and the nighttime breeze seems to carry an aroma of burning fireplaces from the nearby homes.
My friend The Old Tree that stands across the street from my house has made it through another year—and so have I.

I refer to The Old Tree because the tree has weathered another summer. The tree has survived another season of difference—and again—so have I.
The Old Tree stands on a strip of lawn between the street and the sidewalk. Years have taken away many of its limbs. Age has taken away its ability to grow leaves on some of its branches and many of the homeowner’s feel the tree has overstayed its years.

I refer to The Old Tree because regardless to opinion of its shape or ability to flourish; The Old tree refuses to break or submit to the ground.
I see The Old Tree as a symbol of endurance. It may not be pretty to some; however, I see the tree as a beautiful example of life. I view the depth of its roots as representation of my own. Which means I belong where I am.
I have my own versions of beauty and I belong here  . . . exactly here.
Regardless to my struggles and concerns; where I am is where I am supposed to be.  And I like that . . .

Last week, an older man working on top of an elevator in a shaft of an office building told me, “There is no such thing as God.”
“No offense,” he said.
“I know you’re supposed to be some kind of preacher, but I think God is something people made up to explain the things they couldn’t explain by themselves.”

“I’m not really a preacher.”
“I thought you were,” said the mechanic.
“I’m an ordained minister.”
“The mechanic asked, “Is there a difference.”
“There is to me.”

The mechanic swung a ratchet around the nuts that held a guard over a motor and wheel assembly. The elevator shaft was painted black with wire-mesh separating one shaft from the others beside it. Below the mechanic was the empty elevator. Around him were the controls and rolling guides that ride along the beams.
The elevator doors were held open with a tool shoved in the bottom of the track and a chest-high partition unfolded around the workspace to keep tenants from aimlessly walking into the mechanic’s work station.
Black grease stained the mechanic’s hands and outlined the borders of his dirty fingernails. His forehead was smeared with black marks from wiping away the sweat with the top of his forearm.
His blue eyes were slightly bloodshot. His hair was dark and spiked with a slight part, leaning from the left side over to the right. There was a scar shaped like a lightning bolt above his right eyebrow with another at the bottom right corner of his jawbone.
The scar at his jawbone appeared to be a long slice from a razor, which began under the back of his ear and ran midway to his chin. The poorly drawn tattoos exposed along his arms beneath his rolled up sleeve were faded age and appeared to be homemade. His broken smile with missing teeth was perhaps due to his poor choices in hygiene, as well as his poor choice of street fights.

“Don’t get me wrong,” explained the mechanic. “I’m not putting anybody down for believing in God. I just don’t believe, and that’s all there is to it.”

He said, “You cannot prove there is a God to me,” while grinding his teeth as he tightened the nuts on the guard assembly. “Not with everything that’s going on in the world.”

I used to wonder about the existence of miracles. I wondered if life was calculated by some “Higher purpose” for us to learn a valuable lesson before passing on to the next phase of existence.
Like the mechanic—I have my share of scars. I have my arguments and resentments. I have my share of complaints as well as moments of doubt.
I have questions and concerns. I have anxiety. I have a stack of bills that need my attention and a family that needs my support. Like the mechanic, I have good days at work and bad days.

“It’s crazy what we survive,” I said.
The mechanic climbed out of the elevator shaft. He raised his eyebrows in agreement. “You have no idea, my friend.”

“If I was a preacher, I would have tried to swing you over. I would have pointed out the will in your heart to survive and endure, and then I would have asked you ‘Where do you think that came from?’”
I told him, “I’m not trying to sway you.”
“You can’t sway me,” said the mechanic.

There are no words easier than, “You can’t.”
Saying, “You can’t, stops the need to go any further.
“You can’t,” ends the responsibility to carry on.

Like the mechanic, I have my list of troubles.
I have doubt.
I have a list of reasons why the things I want most are just beyond my reach. But I can’t let that stop me.

Someday, this will all make for an amazing story . . . 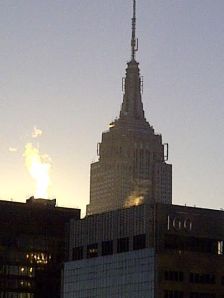