After the long, uncomfortable hours in the precinct with angry desk cops and detectives, and after the questions that came while being handcuffed to the side of a gray-painted steel desk in a small detective’s office—after the yelling cops screamed, “Tell us what you did,” and after the detectives smacked me around, beat me, and played their version of good cop/bad cop; after the several rounds of different accusations and the phone call home to alert my parents of my arrest, the alcohol in my system gave way to the sobering moment that I was caught. I sitting behind a chain-linked fence on a wooden bench with my left wrist handcuffed to a pipe that ran beneath the seating.

After the hours of processing, and the trip to a holding facility where I went through the normal fingerprint routine, the mugshot, and then taken and place in a small cell, I was taken to the courthouse to have my time with the judge.

We the guilty were all cuffed together and placed on a cold steel seat in the back of a panel-like truck without any windows. Everyone was a stranger to me. I was young and terribly small. There was nothing I could do if someone wanted to impose on me.
There would be no way I could defend myself. I was only 16. My arms were weak and thin. My ribs poked through my sides and my skin was an awful shade of pale. There was no way I could deny my problem any longer. There was no way I could talk myself out of what I had become. There was no way I could deny the fear that coursed through my body or the severe drug dependency that led me up to this point.
Above all, there was no place for me to run and hide. The world I created shrunk down and became unthinkably small. I could not pretend to be anything other than what I was; a skinny little baby-faced kid with scraggly long hair, scared of his own shadow, sick from drugs, pretending to be tough, and about to be held accountable as an adult for the first time.

After the bus trip, I was filed out with the rest of the inmates. The guards placed in a series of large cells, which I heard them be referred to as the bullpens. This is where inmates like me and other criminals warmed up before meeting with the judge. The bullpens were a series of large open cells where groups of men waited before being brought up a set of stairs and then led into a courtroom. This is where courtroom appointed attorneys came down to meet with their temporary clients and discuss their limited and mostly unattractive options.

After the group in the bullpen closest to the stairs was taken up to see the judge, the guards moved the group from the neighboring cell into the bullpen before the stairs.  Upon my arrival, I began with a group in a cell that was furthest from the stairs.

Throughout the previous hours, my time seemed to move slowly. Even a second took several minutes and minutes felt like hours. I had nothing to occupy my mind except for the realization of where I was and what I had become. The air was stale and the rooms smelled like men in serious need of a shower.
Before the bullpens it seemed like time moved so painfully slow. In the bullpens, however, time moved quickly. The threat of my future took to the form of an old man in black robe behind a large mahogany box-like desk with a gavel by his side. The closer my group moved to the cell beside the staircase, the more I was afraid.

One by one, the cells ahead of my vacated—and one by one, my group of inmates were taken cell by cell, until we reached the cell next to the steps. Most of the inmates knew the system. Like me, there were a few that never went through this process before. As for us, the inexperienced few, we were counseled by the jailhouse lawyers. They were the inmates who went through the system several times. They were the seasoned veterans; they were the ones that claimed to know the courts and their rights, but yet, no different from any inmate regardless of prior arrests or exemplary records, we were all in the same group.
All of us sat with a charge around our neck like a collar on a dog, and all of us were hopeful the leash or judgement from the judge would be lenient enough that would could somehow escape the punishment for our actions.

This was my first trip into the legal system. I had been stopped and harassed several times before. I was a local kid with local kid problems and a local kid reputation. It was made clear to me by my surroundings, however, that I was so immeasurably small and insignificant. No one cared who I was or what I claimed to be. No one was impressed by my charm or my actions. I was no one here. I was nothing more than a case number in a sea of others.
I learned about the cruel facts of physical might and how little I had behind me.  I knew the beatings that were coming my way if I was held without bail. I knew the smell in cages behind bars would not improve. I knew time would again move so terribly slow and drag out like long, aimless strides of torture.
I knew the fears of open shower rooms with hungry men and stories of rape. I knew about my lack of strength and the merciless smiles of opportunist inmates or guards that would take advantage of someone like me. I was aware for the fear that I could be taken as a small meal and then consume me until there was no meat left on my bones. I was afraid of this all. But . . .

Once I stood in front of the judge and after a series of questions that came my way, which followed with my court appointed attorney whispering to my ear, “Just say “Yes, your honor’” the district attorney rambled off different dates for my next appearance. I was unsure what was happening. The judge granted me an R.O.R (Released On own Recognizance) and remanded me into the custody of my parents.

I asked the public defender, “What does that mean?”
“That means you can go home,” he said. “Just don’t fuck up.”

Of all the threats I faced behind bars with angry inmates or even the horny ones that my have seen me as a longhaired, soft-skinned object—I was most afraid of this; to be released on my own recognizance and remanded to the custody of my parents meant one thing. This meant I had to face The Old Man. I was not afraid of him beating me. I would have rather him hit me. I was afraid of that look he would give me. I was afraid to be faced with his disappointment. I was afraid that another brick in our foundation of being father and son was about to crumble.

My youthful innocence was gone. There were no more games of catch or happy father/son outings. It was time to face what I became. No lies I could create would settle this destruction. I could no longer deny the drug addiction or the activities that went along to feed it. There was nowhere for me to turn and no way I could run anymore.

I was thinking about how I wanted to cry. But I could not. I could not cry because I thought to myself, “Real men don’t cry.”

The fourth time The Old Man cried is when he and I sat alone for the first time after my arrest.

“I wanted them to shoot you,” said The Old Man.

The last time I heard The Old Man cry was on my 17th birthday. My mother and father called me at the facility. I expected my mother to cry—but she was calm. Then The Old Man got on the phone.

He sang the entire song, weeping.
I used to think real mean didn’t cry. The Old Man was as real as they come—and he cried.

I was told about the gifts of sobriety when I entered treatment. I was told that gifts would come my way. At first, I think the gifts I received were small. For example, I was able to remember what I did the day before. I never had sober blackouts—only drunk ones. These gifts were simple to me. I was no longer sickly. I put on a little weight. My skin regained color. My long hair was cut short. I was cleaned up, both mentally and physically. My jaw opened up wide enough that when I spoke, I spoke in a way that did not sound like I was falling in a nod or to the heroin gods.

I had no idea how valuable the gift of sobriety could be until The Old Man’s heart attack. This is when The Old Man told me, “I’m not mad at you anymore.” He told me, “I’m proud of you, son.” And “I love you.”

Of any gifts I treasure most in my 24 years of sober life, aside from the day I married my wife or the first time I heard my daughter call me “Daddy,” I treasure those words from The Old Man more than anything.

By the way, real men do cry

How do I know?

I miss you Pop. 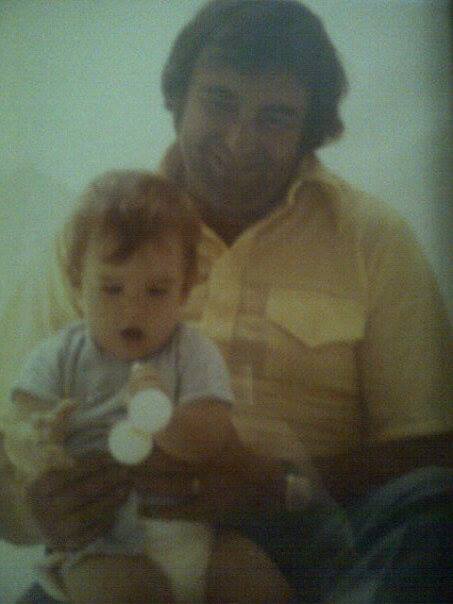