I have never been anyone other than who I am so I could not tell you what it would be like to be anyone else. I have only seen what it means to be a son and not a daughter. There is a different bond between mother and son. It is sometimes turbulent and sometimes misunderstood with moms being the way moms are and sons behaving the way sons behave. Mom is the first to worry. She is the last to sit at the dinner table and the first to wait up when her son comes home late.

Of all forms, there is nothing so strong or as unstoppable as the reach of a mother’s love. A mother’s love can reach beyond all boundaries barriers. It bursts through concrete and steel—it seeps through the cracks no matter how small where otherwise, not even light could pass through.

A mother’s love is unyielding regardless to conditions, through good times and bad; even in the darkest times, the lonely ones, when you’ve thought to yourself how all is lost; a mother’s love will find its way.

Back when I was a kid in school, the teachers used to call home when I did poorly in class. When the principal called, Mom was the one that answered the phone. This did not make for an enjoyable supper. I remember how Mom used to say, “You just wait until your Father hears about this,” to which I sat quietly; chin pointing downward at my chest, eyes focused on the table as I sulked and stirred my fork through the food on my plate. Meanwhile, when The Old Man came home, Mom never told him about the incidents in school.

I admit it. I was wild child. I was tough to handle and often in trouble. fortunateky, as I grew some of the big trouble stopped. It would be dishonest to say all the trouble stopped. It hit rough patches, found myself in legal scuffles, and dealt with a few minor infractions.

I remember staying at a hotel after a wedding one night. Mom was staying in another room. I called down to the front desk to complain about noise and music from a room down the hall. It was way passed the midnight hour and the music was too loud for me to sleep. When I called the front desk, the woman explained she sent someone up to my floor, but they were unable to track the noise. The woman at the desk apologized and assured me she would send someone else to see if they could put a stop to the loud music.

An hour passed and the noise had yet to stop. I called down once more. This time, the woman at the desk was short with me. “I’m sorry, sir. But we can’t find where the noise is coming from. I sent someone up to the floor and they told me it was quiet.”

Early next morning, Mom went down to the front desk to check out. Apparently the woman at the desk was still on duty when this happened.
She asked my Mom, “Your last name is Kimmel?”
“Yes it is,” answer Mom.
“Are you with Ben Kimmel,” asked the woman at the desk.
“He’s my son,” explained Mom.
“Well your son cursed at me on the phone last night!”

Mom asked, “Did you call down and curse at the woman behind the desk last night?”
“Yes I did.”
“Well, she just told on you,” said Mom.
I suppose she laughed in part because it had been a long time since anyone ever told Mom I was misbehaving.I suppose she laughed because I was an adult, complaining about adult things and and taking care of my own adult life.

When Mom was at her sickest, there was a piece of me—like a little boy inside the man I am now, and that piece somehow thought that Mom would always be there with me. That little boy in me thought that somehow, Mom would be okay.
I believed this because deep in my little boy heart, I swore that Moms are never allowed to leave. Moms are not allowed to get sick or go someplace else, because if they do, then who will be around to take care of us?

Mom died in the afternoon of June 10, 2015.
Spoken for by me, her healthcare proxy, Mom went as she asked to go.

So much has happened since Mom left. So many things have changed. I live someplace else now. I have learned to deal with the mourning process and the feelings I have about those who pass.
Mom’s eyes are no longer half-closed with pain. Her back is no longer hunched and Mom is able to walk freely without a walker. Most important, Mom is reunited with The Old Man. She’s dancing now. She laughs and she smiles. My parents are together again and where they live now is someplace that you or I could never comprehend.

I often ask my parents to visit. I know this kind of visit is not the sort of visit I am used to. This means I have to look for special signs. I was told to look for butterflies. I was told about feathers. I was told when I need these visits most, the visits will come.

A few months after moving into our new home, a baby bird flew on the deck. The baby red-breast was perched and sitting very still. I walked over and stood beside it, but the bird was not frightened. I pet the bird, but the bird did not fly away. I crouched beside the bird and gently ran my finger across the feathers behind the bird’s neck. Still, the bird remained for a while longer until the bird felt it was time to fly away.

Months later, I walked in through my front door after a long, hard day at work. One thing about life in the mountains is the sky is truly dark at nighttime. The saying, “Black as night,” has true meaning where I live, which is why when I opened my front door, I never expected a little baby bird to fly in and fly around my house.
I laughed. I found the bird (not sure what kind of bird this one was) talked to it, and then I took the little bird outside and placed it in a bush. Things like this are rare to me. Suffice to say, I assumed it was the wildlife in my neighborhood. Again, I had no idea how meaningful this was

Then one day, I was walking up 42nd Street, crossing 6th Avenue, and standing near the Grace Building on the sidewalk was a little golden finch. This is an odd bird to see in NYC. It is also rare to walk up to a bird like this, place my hand in front of the bird’s chest, and

have it perch on my finger. My reason for doing this is because when I approached, the bird did not fly away. I was unsure if the bird was hurt or sick. Apparently, the bird was neither.

I knew I needed to take a picture of this. I knew that no one would believe me. How many birds can one come in contact with?
I snapped a picture with the little golden finch, placed the bird on my shoulder, and then I began to walk. Perhaps the bird was finished with the visit. Maybe the people around us were frightening. Whatever the case was, the little bird flew away and landed up on a branch in a tree. The bird looked down at me as I looked up at it and I said “Goodbye,” with all the love in my heart.

I pass this spot at 42nd Street on a daily basis. I look for the little golden finch, but to no avail.  And it hurt. It hurt not seeing this bird again. It hurt because I needed another visit.

Weeks later, I had another encounter. This time the bird was a little baby sparrow. I noticed the bird on the sidewalk. I immediately approached, and perched the little bird on 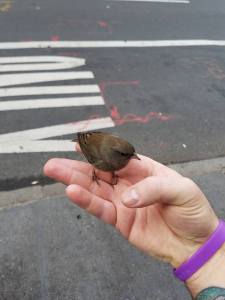 my hand. I was very gentle. I stroked the little bird’s feathers, to which the bird responded by tilting its head, as if to explain, “Yeah, that feels good.”

I took the bird over to the park across the street and found a little bush. As I approached the bush, several sparrows flew over, curious to see me and my new little friend. And same as the finch, I looked at the sparrow as it looked at me and said, “Goodbye,” with all the love in my heart.

I miss you, Mom

Hope to have another visit from you soon